To share your memory on the wall of DAISY CLAYTON , sign in using one of the following options:

Print
Daisy June Clayton of Comanche ended her worldly suffering on February 2, 2021. She died peacefully at her home.

Daisy was born December 10, 1941 in Ranger, Texas. Her parents were Cecil and Mary Ellen Stewart. She was united in mar... Read More
Daisy June Clayton of Comanche ended her worldly suffering on February 2, 2021. She died peacefully at her home.

Daisy was born December 10, 1941 in Ranger, Texas. Her parents were Cecil and Mary Ellen Stewart. She was united in marriage in 1960 to Lindley Clayton of Desdemona and had one son, Ricky. She had two sisters, Deloris Ashley and Doris Stevens, and two brothers, Joe and Wylie (Dub), daughter-in-law Vera, grandchildren Martin Patterson and Bryan Patterson of Comanche, great-grandchildren Faith Starnes of Stephenville and Christopher and Braxton Patterson of Comanche. She was a homemaker in Desdemona for Many years. She was an excellent seamstress and worked in the garment industry throughout the 1970’s. She lived in Abilene, Fort Worth, and Stephenville in the 1980’s working in the motel business and was the Assistant Manager of the Best Western motel in Stephenville for many years. Later in her life she worked as a care giver in the home health business. Daisy was a lady who knew the value of work and worked as hard as she could for as long as she could her entire life.

Daisy was a loving, caring mother to her son, she was never too busy to lend a hand or a shoulder to cry on. Her whole world revolved around being a mother, and she worked hard at it. She was a devoted daughter to her parents and loving sister to her siblings. She will be missed terribly by all her family. She was preceded in death by her mother and father, brothers Dub and Joe, sister Deloris, and former husband Lindley.
Read Less

To send flowers to the family or plant a tree in memory of DAISY JUNE CLAYTON , please visit our Heartfelt Sympathies Store.

Receive notifications about information and event scheduling for DAISY

We encourage you to share your most beloved memories of DAISY here, so that the family and other loved ones can always see it. You can upload cherished photographs, or share your favorite stories, and can even comment on those shared by others. 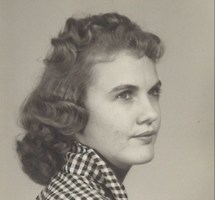