To share your memory on the wall of DEBBIE MORRISON, sign in using one of the following options:

She was born on September 9, 1954, in San Antonio, Texas, to Bobby Joe and Anna (Cox) Rinehart. Debbie On June 7, 1973, she was united in marriage to Don Morrison at Lake Proctor, Texas. Debbie was a wonderful wife, mother, grandmother and great-grandmother. She was kind and loving to all she met and would go out of her way to help anyone in need. Debbie was an avid bird watcher. She loved fishing and spending time outdoors. She was a Baptist.

She is survived by her husband, Don Morrison of Comanche; son, Dustin Morrison and wife Vicki of Comanche; five grandchildren: Aaron Hollars of Lubbock, Dillon Beverage of Lubbock, Dustin Beverage of Plainview, Savannah Estrada and husband Felix of Waco, and Hanna Raissez and husband Jose of Plainview; five great-grandchildren; sister, Patty Rinehart of De Leon; nephews, James Terrell of Gustine and Rodney Terrell of Gustine; and niece, Angie Butler. She was preceded in death by her parents, Bobby Joe and Anna Rinehart; and sister, Jeannie McCormick.
Read Less

To send flowers to the family or plant a tree in memory of DEBBIE MORRISON, please visit our Heartfelt Sympathies Store.

Receive notifications about information and event scheduling for DEBBIE

We encourage you to share your most beloved memories of DEBBIE here, so that the family and other loved ones can always see it. You can upload cherished photographs, or share your favorite stories, and can even comment on those shared by others.

Posted Nov 25, 2020 at 02:21pm
Debbie was an Angel on Earth who most definitely touched many lives for the better. Very loving and kind woman of God. Who will be greatly missed though I know she's up in Heaven celebrating and fishing as she waits for Don. My heart goes out to her family and friends. My prayers are with yall.
Comment Share
Share via:
DW

Posted Nov 23, 2020 at 11:05pm
Very, very kind caring and giving lady. Bless her heart. She can now be free of all the pain and discomfort she has endured for so long. RIP Debbie. Fly with the Angel's. U will b missed.
Comment Share
Share via:
S

Posted Nov 23, 2020 at 09:22pm
I always thought a lot of Debbie, and her family. They were always kind to me all the time. Never took sides. But always stood behind my 2 kids when they were growing up. I will never forget it. God blessed me with these two sweet people in my life. Prayers for comfort.
Comment Share
Share via: 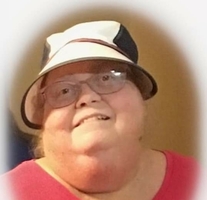