To share your memory on the wall of DON WAIGHT, sign in using one of the following options:

He was born on April 26, 1929, in Dalhart, Texas, to William A. and Thelma (Jenkins) Waight. Don was a United States Army Veteran. In December, 1954, he was united in marriage to Ida Mae Gilmore. She preceded him in death. In 1973 he married Salley Dillard Moore, who also preceded him in death. Don was a wonderful husband, father, and grandfather. He was very talented and could do anything at which he tried his hand. He drove a tractor for Fisk, worked for Dr. Pepper Bottling Co., helped construct airplane hangars in Dalhart, and, for forty-three years, worked for Rock Island & Southern Pacific Railroad.

To send flowers to the family or plant a tree in memory of DON WAIGHT, please visit our Heartfelt Sympathies Store.

Receive notifications about information and event scheduling for DON

We encourage you to share your most beloved memories of DON here, so that the family and other loved ones can always see it. You can upload cherished photographs, or share your favorite stories, and can even comment on those shared by others. 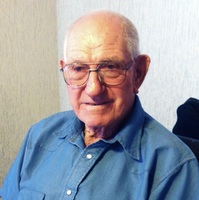