To share your memory on the wall of GLENDA ALBIN, sign in using one of the following options:

Print
VISITATION: No formal visitation has been set.

She was born on July 12, 1946, in Clarksville, Texas, to David L. and Sarah (Gray) McGill and grew up in the west Texas town of Kermit. Glenda attended Tarleton State College, where she me... Read More
VISITATION: No formal visitation has been set.

She was born on July 12, 1946, in Clarksville, Texas, to David L. and Sarah (Gray) McGill and grew up in the west Texas town of Kermit. Glenda attended Tarleton State College, where she met her future husband, Billy. Billy picked her out of a group of eight or ten girls in the Tarleton Cafeteria during her freshman year. They were married on February 3, 1968, in Stephenville. Glenda was a devoted wife and mother and was involved in everything her family did. She was especially supportive of all Billy’s interests and activities.

Glenda thoroughly enjoyed her years at college, where she made lifelong friends. She began her teaching career in Gustine and always had fond memories of her “Gustine Kids”. After transferring to Comanche I.S.D. she spent the majority of her forty-one years teaching seventh grade English. She was an excellent teacher and did everything she could to help her students succeed. Although she was strict, Glenda had a kind heart and never had a negative word to say about anyone, either in or out of the classroom.

She enjoyed traveling, touring Antebellum homes, and especially loved her favorite children, Missy and Sadie – her pups. Glenda was baptized as a Baptist, but attended the Methodist Church in Comanche.

She is survived by her husband, Billy Albin of Comanche; daughter, Lauri Albin of Comanche; son, Joseph Albin and wife Maggie of Early; brother, Don McGill and wife Patti of Odessa; and numerous nieces and nephews. She was preceded in death by her parents, David and Sarah McGill.
Read Less

To send flowers to the family or plant a tree in memory of GLENDA McGILL ALBIN, please visit our Heartfelt Sympathies Store.

Receive notifications about information and event scheduling for GLENDA

We encourage you to share your most beloved memories of GLENDA here, so that the family and other loved ones can always see it. You can upload cherished photographs, or share your favorite stories, and can even comment on those shared by others.

My heart hurts with you in the loss of Glenda. Prayers to your family. Love, the Carl Chumney family. 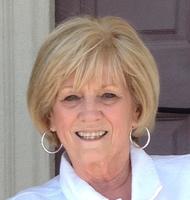