To share your memory on the wall of IRMA LEE TOWE, sign in using one of the following options:

Print
IF IT IS RAINING, THE SERVICE WILL BE HELD IN COMANCHE FUNERAL HOME CHAPEL INSTEAD OF AT THE GRAVESIDE. Masks and social distancing are required.

She was born on September 8, 1936, in Norton, Texas, to Leonard Fred and Mary Elizabeth (M... Read More
IF IT IS RAINING, THE SERVICE WILL BE HELD IN COMANCHE FUNERAL HOME CHAPEL INSTEAD OF AT THE GRAVESIDE. Masks and social distancing are required.

She was born on September 8, 1936, in Norton, Texas, to Leonard Fred and Mary Elizabeth (McSwain) Taylor. On August 2, 1952, he was united in marriage to Allen Edward Towe. He preceded her in death on March 12, 1987. She was very family oriented and was devoted to her husband, children, grandchildren, great-grandchildren and great-great-grandchildren. She would do anything she could to make them comfortable and happy. Irma Lee was a devout Christian and loved reading her Bible and praising the Lord. She was a faithful member of Full Gospel Church in Comanche.

She is survived by her sons, Dwayne Towe and wife Darlene of Pampa, Michael Towe of Amarillo, and David Towe and wife Betty of Hereford; daughter, Lisa Hatley and husband Jack of Comanche; twelve grandchildren; numerous great-grandchildren; numerous great-great-grandchildren; sisters, Frida Drew of Arlington and Alice Ripley and husband Travis of Missouri; brothers, Richard B. Taylor and wife Mildred of Waxahachie and Leonard Fred Taylor of Brownwood; and many, many nieces and nephews. She was preceded in death by her parents, Leonard and Mary Taylor; daughter, Mary Francis Hopson; sons, John Edward Towe and Roy Dean Towe; brother, Lewis Edward Taylor; and sister, Barbara Ann Martindale.
Read Less

To send flowers to the family or plant a tree in memory of IRMA LEE TOWE, please visit our Heartfelt Sympathies Store.

Receive notifications about information and event scheduling for IRMA LEE

We encourage you to share your most beloved memories of IRMA LEE here, so that the family and other loved ones can always see it. You can upload cherished photographs, or share your favorite stories, and can even comment on those shared by others. 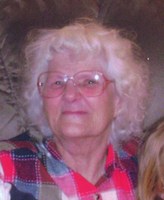