To share your memory on the wall of L.E. (SONNY) WILSON, sign in using one of the following options:

Provide comfort for the family by sending flowers or planting a tree in memory of L.E. (SONNY) WILSON

Provide comfort for the family by sending flowers or planting a tree in memory of L.E. (SONNY) WILSON

He was born in Smith Grove, Kentucky to Luther E., Sr. and Ruth (Jackson) Wilson.
Sonny moved to Comanche, Texas from Kentucky with his young family in the mid 70’s. He worked as a tractor mechanic and spent most his life here as a farmer and rancher. He had various hobbies that included hunting, fishing, antique tractors & taking care of his herd of cattle.

Sonny was preceded in death by his father, Luther E. Wilson, Sr. and his former wife, Joan Spann Wilson, both of Kentucky, as well as, his wife of many years, Barbara Nelson Wilson of Comanche, Texas.
Read Less

To send flowers to the family or plant a tree in memory of L.E. (SONNY) WILSON, please visit our Heartfelt Sympathies Store.

Receive notifications about information and event scheduling for L.E. (SONNY)

There are no events scheduled. You can still show your support by sending flowers directly to the family, or planting a memorial tree in memory of L.E. (SONNY) WILSON.
Visit the Heartfelt Sympathies Store

We encourage you to share your most beloved memories of L.E. (SONNY) here, so that the family and other loved ones can always see it. You can upload cherished photographs, or share your favorite stories, and can even comment on those shared by others. 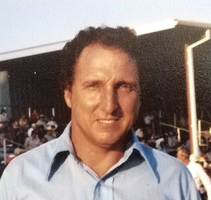