To share your memory on the wall of MARGARET LESTER, sign in using one of the following options:

Margaret was a wonderful wife, mother, grandmother, and great-grandmother. For fourteen years she worked for Higginbotham Bros. in De Leon. She was an excellent homemaker, baker and seamstress, and loved creating a welcoming atmosphere in her home for family and friends. Margaret loved to travel whenever the opportunity arose. She was a member of First Baptist Church of Comanche.

She is survived by her daughter, Terry Lynn Blagg of Brownwood; grandchildren, Lezleigh Seerey and husband John of Fulshear, and Perry Wayne Blagg of Austin; great-grandchildren, Brooklyn Seerey, Brinley Seerey, and Beau Seerey; a beloved sister-in-law and “Sister”, Jean Stokes of Stephenville and youngest sister Mary Stokes Daniel and husband David of Carrollton and numerous nieces and nephews. She was preceded in death by her parents, William Dale and Beatrice Stokes; sister, Ruth Ell Price; brothers, Garnet Stokes and Floyd Stokes; and son-in-law, Lanny May.

To send flowers to the family or plant a tree in memory of MARGARET STOKES PERRY LESTER, please visit our Heartfelt Sympathies Store.

Receive notifications about information and event scheduling for MARGARET

We encourage you to share your most beloved memories of MARGARET here, so that the family and other loved ones can always see it. You can upload cherished photographs, or share your favorite stories, and can even comment on those shared by others.

Posted Aug 20, 2020 at 03:51pm
Our thoughts and prayers are with you. From the Mike, Gail, Dolores Seerey, James and Jennifer Bond and Eric and Amy Roddy.

Gracious Lavender Basket was purchased and planted a memorial tree for the family of MARGARET LESTER. Send Flowers 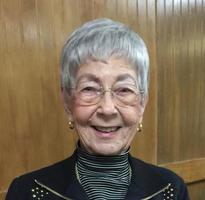