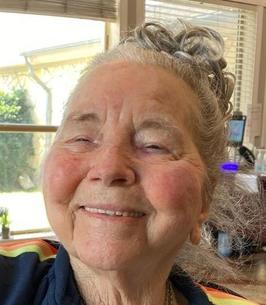 She was born on January 4, 1928, in Mineral Wells, Texas, to Dean and Cynthia Ella (Mahan) Gentry. Oleta always loved learning and during her senior year she was often taken out of class to teach younger students. She studied business, secretarial skills, and even obtained her real estate license.

On May 31, 1947, she was united in Marriage to Jarrett Newton Hicks in Dublin, Texas. He preceded her in death on December 17, 2007. They had five children and moved all over the United States for Newt’s work. In 1962, they moved back to Comanche to stay. Oleta went to college in Brownwood and secured a job at Higginbotham Bros., where she worked until she became Postmaster in Hasse, Texas. She and Newt owned Hasse store, in which the post office was located. She moved to Blanket and retired as Postmaster in Blanket. While she was Postmaster the postal service wanted her to go to Washington DC to teach other postmasters, but she didn’t want to leave her family. She loved her job, especially the fact that she was able to visit with everyone in town and all who got to know her loved her. She and Newt loved to travel and when asked what was the one thing she wished she could have done that she didn’t do, she said “Nothing. I have done it all”. In her later years when asked what was most important in her life she replied “The Lord God, my children, grandchildren, and my many memories. Oleta was a member of East Side Baptist Church.