To share your memory on the wall of DALE HOLMSLEY, sign in using one of the following options:

Print
MEMORIALS: If desired, memorials may be made to a charity of choice.

Dale attended Newburg and Comanche schools. He had a passion for baseball ... Read More
MEMORIALS: If desired, memorials may be made to a charity of choice.

Dale attended Newburg and Comanche schools. He had a passion for baseball and softball.

He was married to Janice McCasland January 13,1953. To this union was born Linda, Peggy, and Rickey.

To send flowers to the family or plant a tree in memory of DALE HOOVER HOLMSLEY, please visit our Heartfelt Sympathies Store.

Receive notifications about information and event scheduling for DALE

We encourage you to share your most beloved memories of DALE here, so that the family and other loved ones can always see it. You can upload cherished photographs, or share your favorite stories, and can even comment on those shared by others.

Posted Aug 11, 2020 at 01:05pm
Janice! My sincere condolences to you and your family. My heart goes out to you at this difficult time. Sending prayers, love and hugs!
Comment Share
Share via:
LC

Posted Aug 09, 2020 at 01:31am
Janice, I know you are going to miss him and I know everybody else will too. From the time I knew him he was a hard worker at whatever he did. Sorry for your loss. We will be thinking of you all. Larry Conway, Eula, Tx
Comment Share
Share via:
JC 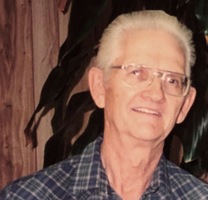