To share your memory on the wall of JAMES RICKELS, sign in using one of the following options:

He was born April 22, 1946, in Raton, New Mexico, to Elliott and Mildred (Osborne) Rickels. James was a United States Army Veteran. On January 30, 1982, he was united in marriage to Donna Sue Spivey in Graham, Texas. She preceded him in death on October 28, 2007. He was a loving husband, father, grandfather and great-grandfather. James was a Dairy Nutritionist. He was a member of Zephyr Baptist Church.

To send flowers to the family or plant a tree in memory of JAMES MAC RICKELS, please visit our Heartfelt Sympathies Store.

Receive notifications about information and event scheduling for JAMES

We encourage you to share your most beloved memories of JAMES here, so that the family and other loved ones can always see it. You can upload cherished photographs, or share your favorite stories, and can even comment on those shared by others.

Bud and Edith Rickels, Lon, Rachel and Feli Werner, Walt & Beth Bruton Barbi & Victoria, and other have sent flowers to the family of JAMES MAC RICKELS.
Show you care by sending flowers

Posted Oct 02, 2020 at 12:46pm
Please accept our most heartfelt sympathies for your loss... Our thoughts are with you and your family during this difficult time.

3 trees were planted in the memory of JAMES RICKELS

Posted Sep 30, 2020 at 09:52am
For Mac. Soldier, you have fought your last battle. Your service here has ended. Join a higher service with our Lord. Rest In Peace.

3 trees were planted in the memory of JAMES RICKELS

Sentiments of Serenity Spray was purchased and planted a memorial tree for the family of JAMES RICKELS. Send Flowers 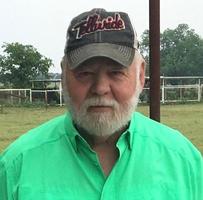